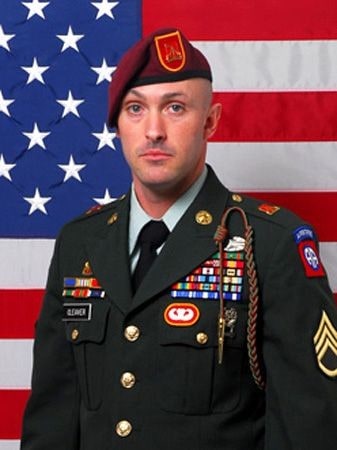 John was born October 25, 1973 in Joplin, Missouri. He was a member of South Joplin Christian Church. He attended Joplin schools and Galena High School. He attended Henderson State University, Crowder College, and Virginia. He earned his Private Pilot License and became a Nationally Certified EMT.

He joined the Navy in 1995 in Damage Control (nuclear, chemical, biological, & fire warfare). He was stationed on the U.S.S. Inchon. After serving in the War in Kosovo, he transferred to Norfolk as a Fire-fighting Instructor. Later, he was stationed aboard the U.S.S. Rodney M. Davis and deployed to Operation Iraqi Freedom. He served ten years in the Navy and had the rank of Petty Officer.

He transferred to the Army, 82nd Airborne as a Staff Sergeant at Ft. Bragg. He was deployed to Afghanistan for Operation Enduring Freedom. He worked as a convoy commander and volunteered for the Anti-Tank Platoon and as an assistant to the medics in his spare time. When he returned, he completed his paratrooper training and received his wings. He began training to become a Jump Master. He passed the tests to have the job of medic listed to his MOS. He completed the FBCB2-BFT Leader/Operator Course at the Ft. Bragg Battle Command Training Center and the Warrior Leader Course.

In 2009, he was sent to FOB Apache, Afghanistan. Within two hours of President Hamid Karzi being sworn into office; SSGT John Cleaver and Sgt Daniel Frazier were killed by a suicide bomber with a VB-IED. They and two other unarmed paratroopers prevented the bomber from entering the main gate by running in front of the vehicle and deterring it. The bomber detonated.

He requested his ashes be scattered “as high in the atmosphere as possible.”

Survivors include two sons, Collin Cleaver and Aidan Cleaver, their mother Kim Sola; and his father and mother, Ronald and Teresa Cleaver.