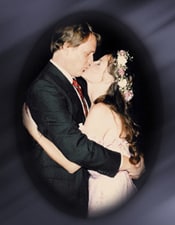 "Treasure these few words 'til we're together.
Keep all my love forever.
PS. I love you."

Robert Walker Hagood was born August 9, 1946 in Honolulu, Hawaii. This would explain his desire to wear white pants and an "aloha" shirt at our wedding. It was easy to find a compromise with Bob, which is why he wore a black tuxedo with a white jacket on that warm September night in 1983. Bob always had a little difficulty in remembering important dates and numbers, so we made things simple: Birthday-8/9, wedding anniversary-9/10.

His family moved to the mainland when Bob was three. He spent his "formative" and "teenage" years in Levittown, Pennsylvania, wreaking havoc with his lifelong friend and neighbor, Jerry. You wouldn't believe what these two junior mad scientists "created" in their basements. Bob was an avid reader of comic books as a child. Later these tastes grew to include just about anything in print, with his favorite authors being Heinlein, Creighton, and King, and most scientific/engineering related magazines.

After graduating from Neshaminy High School in Langhorne, Pennsylvania in 1964 Bob's family moved to Southern California. It was here that Bob planted roots and remained for the rest of his life. He graduated belatedly from Pasadena City College in 1984.

Bob proudly served his country in Vietnam as a Staff Sergeant in the U.S. Marine Corps. He was authorized to wear the combat "V" for coming under hostile fire. The stories of his exploits in boot camp and in country still make me laugh 'til I cry. To hear him tell it, he was never really in harms way.

In 1980 I went to work at the Jet Propulsion Laboratory, Pasadena, California where I met Bob Hagood my first day. I thought he was very cute in his blue jean jacket. He wanted to know the lady behind the sad blue eyes. He loved his work at JPL. He would often go in early on the weekends while I slept in. This might sound confusing, but it wasn't really "space" that he loved, rather the mechanics of exploration.

"When life gives you lemons, you make lemonade," was one of his favorite sayings. Bob, to put it mildly, drank an ocean of lemonade during his last thirteen years. After surviving testicular cancer, and malignant melanoma, he finally succumbed to his battle with Multiple Sclerosis and Diabetes Mellitus. His life was bittersweet indeed, but still he lived life to the fullest.

Lucky is the individual who possesses a fraction of Bob's character, strength, will, determination, generosity and capacity for forgiveness. I loved you more than all the elements in the Universe. You loved me twice that much. Sleep well, my darling.

I love you always,
Susan

P.S. I'll be the one in white pants and an "aloha" shirt.