The woman who captivated the world with her portrayal of Lieutenant Nyota Uhura on Star Trek’s original series was born to Lishia and Samuel Nichols in Robbins, Illinois, on December 28th, 1932. One of 10 children, according to her IMDb biography, “As long as she could remember, she wanted to do nothing but sing, dance, act and write despite no one else in her family following any of those tracks; although her father could tap dance. He not only became mayor of their town, Robbins, Illinois, but also a magistrate.”

Nichols embodied Black Hollywood glamour and was integral to entertainment history before her star turn on Star Trek. She was known as a singer and dancer, possessing a rich, stunning singing voice that she would later showcase in a short film she produced for the Smithsonian Air and Space Museum. She was discovered by Duke Ellington during her teenage years and grew up around the corner from Mahalia Jackson. In 1951 during her first marriage, her only son, Kyle Johnson, was born; he would also become an actor.

In 1966, Nichols –then 33 years old – became one of the first Black television stars, arguably changing the world and how it viewed racial and gender roles. The television show Star Trek, created by screenwriter and producer Gene Roddenberry, showcased a multiracial, multigender crew. The show’s spacecraft, Enterprise, boasted a Black female communications officer on its bridge: Lt. Uhura. Actress Whoopi Goldberg, who later starred in Star Trek: The Next Generation, remarked in a recent interview, “Nichelle was the first Black person I’d ever seen who made it to the future. She was head of communications. This show and this woman was a beacon that said yes, we’ll be there. And it just made me feel like that was an amazing thing, and she helped propel other women to go into space.”

Roddenberry’s message – that it would take all kinds of beings to summit space – was not, by any means, unintentional. In a 2011 interview with the Smithsonian Air and Space Museum’s Margaret Weitekamp, “[Gene] didn’t want just a communications officer. Anyone could do that, could say lines. He wanted to add a dimension to [these] people who go out where no man or woman has gone before. [For them] to be real people, to have other talents. And so Uhura’s [talent] was as a singer. She had a sense of humor. She had a no-nonsense mind.” Roddenberry created the role, in fact, with Nichols strictly in mind for the part.

However, after the first season had ended, Nichols became frustrated with the show. According to IMDb, she discovered “the studio was withholding her fan mail” and had also received racist harassment. She submitted her resignation notice to Roddenberry on a Friday, who initially refused to accept her letter. According to the Star Trek website, “He took it and looked at it with sad eyes. He was behind his desk, and I was standing in front of him, and – I’ll never forget it – he said, 'I’m not going to accept this yet.' He put it in his desk drawer and said, 'Take the weekend and think about this, Nichelle. If you still want to do this on Monday morning, I will let you go with my blessings.’ I said, 'Thank you, Gene.' And I thought, 'Whew, that was rough, but I got through it.’” Nichols planned to return to Broadway as a singer and dancer.

The same weekend, she attended what she remembered as an NAACP fundraiser. An organizer approached her at the event, stating her “biggest fan” was waiting to meet her. In her words:

I said, “Oh, certainly,” I stood up and turned around and who comes walking over towards me from about 10 or 15 feet, smiling that rare smile of his, is Dr. Martin Luther King. I remember saying to myself, “Whoever that fan is, whoever that Trekkie is, it’ll have to wait because I have to meet Dr. Martin Luther King.” And he walks up to me and says, “Yes, Ms. Nichols, I am your greatest fan.” You know I can talk, but all my mouth could do was open and close, open and close; I was so stunned.

Nichols remembered Dr. King as saying to her, “Do you not understand what God has given you? You have the first important non-traditional role, a non-stereotypical role. You cannot abdicate your position. You are changing the minds of people across the world, because for the first time, through you, we see ourselves and what can be.” This conversation with America’s most legendary civil rights leader convinced Nichols to tear up the resignation letter and remain in her Star Trek role, where she stayed until the original series was canceled in 1969.

In the meantime, Roddenberry's creation continued to break television barriers. In 1968, William Shatner – who played Captain James T. Kirk in the original series – and Nichols shared what is considered television’s first interracial kiss in the episode “Plato’s Stepchildren.” NBC executives were nervous that this kiss would anger viewers, particularly in the deep South. However, Nichols maintained that reactions to the kiss were mostly positive; many girls wrote letters asking her what it was like to kiss someone as handsome as Captain Kirk (and vice versa – many men asked Shatner what it was like to kiss a woman as beautiful as Nichols).

Nichols also underestimated how her status as a role model would impact actual spaceflight. During the mid-1970s, NASA sought new astronauts for its Space Shuttle program. The program would utilize not just test pilots but a diverse array of scientists. And for the first time, NASA openly welcomed women and minorities to its astronaut corps. But messaging was a problem; the space agency had trouble getting the word out that all kinds of people could apply to the astronaut program. What it needed was someone with true star power. Enter Nichelle Nichols. While Star Trek had been canceled years before, it had attained cult status and a devoted fan base called “Trekkies.” By the end of the 1970s, the franchise had even released the first in a series of motion pictures.

Nichols had befriended NASA’s Jesco von Puttkamer after hearing him speak at a 1975 Star Trek convention and had given a speech at a National Space Institute (now the National Space Society) event where she’d taken NASA to task over its lack of diversity. NASA was listening, and the agency’s then-Administrator, James Fletcher, asked her to conduct a public relations campaign to entice a more diverse population to apply to the program.

According to Weitekamp, Nichols was resolute and demanded that NASA’s new approach was not just lip service. She remembered, “So, I said, if I take this on, and this becomes [real], I’ll be your worst nightmare…I intend to speak before Congress for this, and to all the newspapers and all the television [stations]…I’m going after PhDs in physics, chemical engineering...And these people, I will not insult by trying to convince them of something that is not possible.” Nichols’ public service campaign – conducted by her wearing a bright blue NASA flight suit – convinced thousands of potential candidates to apply to the astronaut program. Her clarion call, “This is your NASA,” inspired qualified candidates, including Sally Ride and Guy Bluford, to sign up.

In January 1978, NASA’s newest class of astronauts was announced, the “Thirty-Five New Guys” or TFNGs. It boasted the first six women astronauts, three African-Americans, and one Asian-American. Today’s NASA, which seeks to place a woman and a person of color on the Moon during this decade, looks much different from the program that existed when Star Trek debuted in 1966, thanks to Nichols. She remained a friend to and supporter of the space agency following her “Woman in Motion” publicity blitz, which later became the subject of a documentary bearing the same name.

Nichols is survived by her son, Kyle. When she passed away in late July at age 89, she was remembered as a television legend and a civil rights pioneer, showing millions a hopeful vision of humanity’s future. Her vision, along with that of Gene Roddenberry’s, continues to inspire generations. In her words:

Star Trek represented, and still does represent, the future we can have, a future that is beyond the petty squabbles we are dealing with here on Earth, now as much as ever, and we are able to devote ourselves to the betterment of all humankind by doing what we do so well: explore. This kind of a future isn't impossible – and we need to all rethink our priorities to really bring that vision to life. 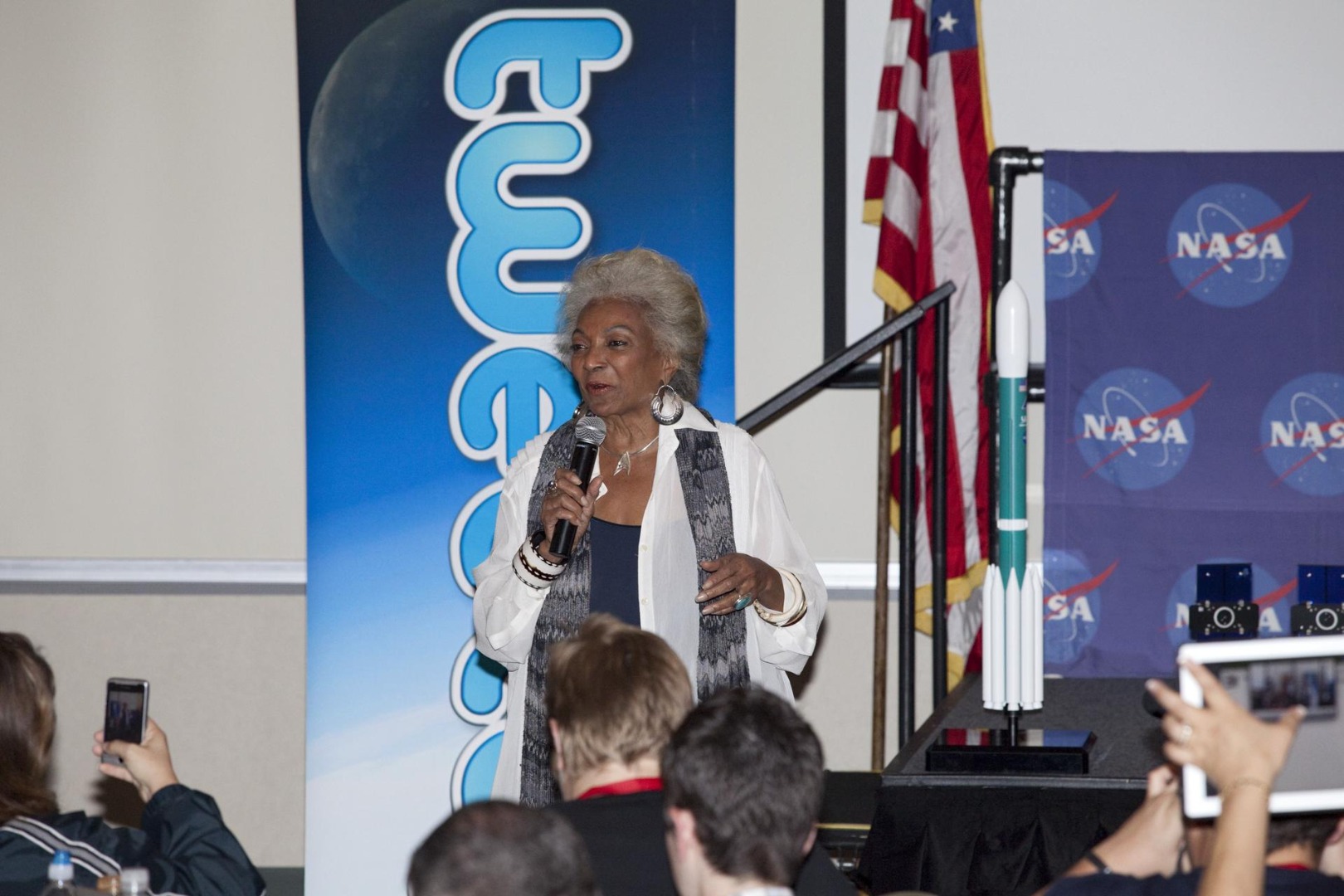 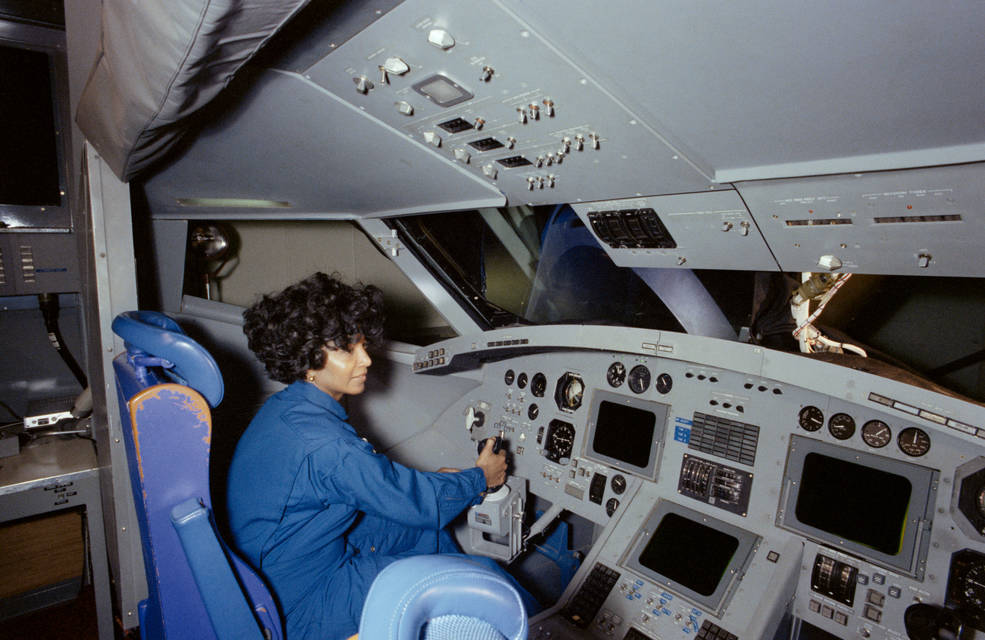 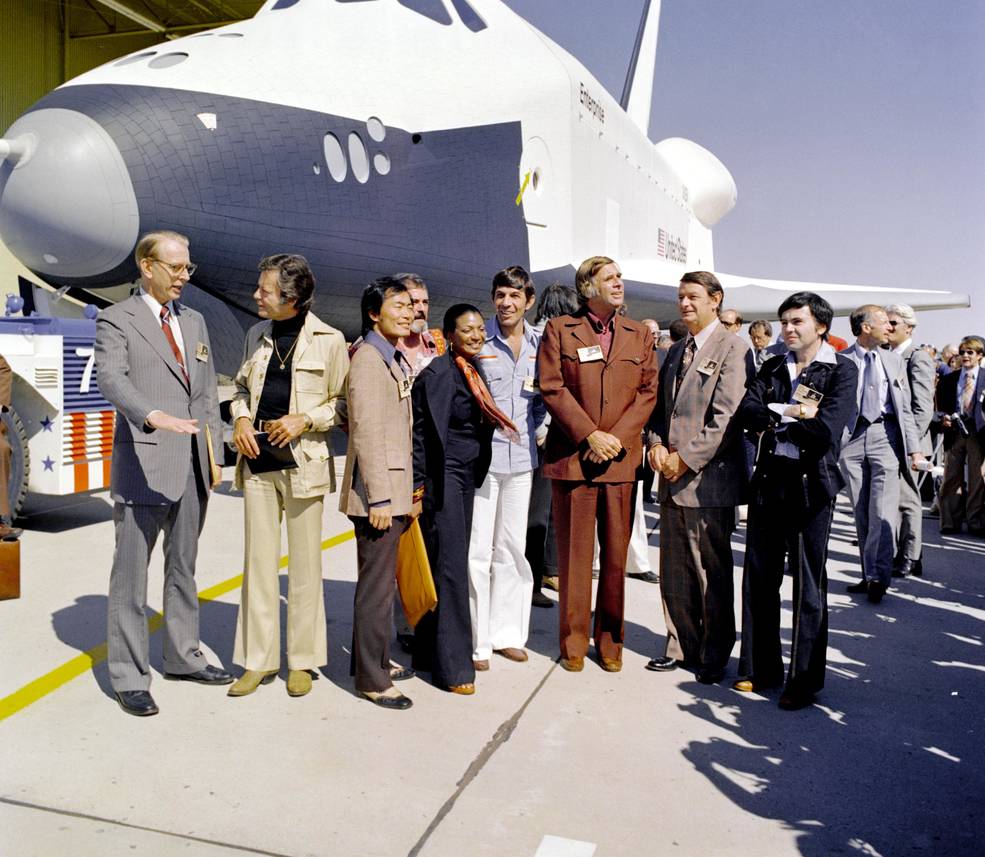