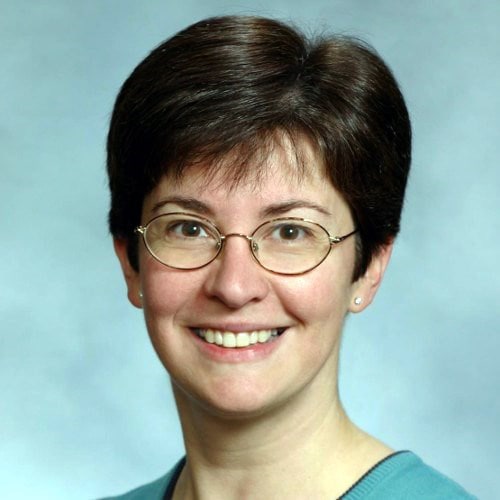 Natércia Luisa Costa Kontoules was born in the small town of Vila Franca do Campo on the island of São Miguel in the Azores. She was the eldest of five children and immigrated to the United States with her family when she was 8 years old. Despite the hardships and obstacles of settling into a new country, she worked hard to learn English and excelled at her studies. She eventually went on to become the valedictorian of the Class of 1976 at St. Mary’s High School in Somerville. She continued her education at Harvard University, graduating Cum Laude with a degree in Biology in 1980. Following her undergraduate, she attended NYU School of Medicine and earned her Doctorate in 1984. Luisa returned to Boston to finish her medical training, completing her residency at Tufts University School of Medicine in 1988.

She began her professional career that same year, when she was hired by Swampscott OB/GYN. In 1991, she became a founding partner of Salem Women’s Health Associates, and was also elected a fellow of The American College of Obstetricians and Gynecologists. Over the years, Luisa worked as an OB/GYN for many different hospitals and health centers, including Salem Hospital, Beverly Hospital, Lynn Community Health Center, Torigian Family Health, and Tufts Medical Center. She eventually opened her own private practice in Peabody, and worked there for over 10 years. During that period, she also worked as a laborist at Cape Cod Hospital on weekends, and when she made the decision to close her practice, she was employed by Internal Medicine Physicians of the North Shore. Over the course of her career Luisa helped countless patients, brought nearly 4,000 babies into the world, and was a well-respected member of the medical and local communities. Many loyal patients followed her to wherever new work carried her, because she was the best at what she did, and treated everyone with the utmost compassion and the highest quality of care.

Luisa enjoyed many hobbies, including travel, gardening, and music. She especially loved playing the piano, knitting and cross-stitch, decorating for the holidays, watching cooking shows, and Christmas. Her favorite places to visit were Disney World, Rockport Massachusetts, and anywhere with an ocean view. She also enjoyed attending monthly meetings of the North Shore Ladies’ Investment Club, a group in which she met and bonded with several of her closest friends. Luisa never met a cup of coffee or a piece of chocolate that she didn’t like, and she could often be found indulging in her favorite guilty pleasure pastime: making shopping runs for clearance steals at Target. She was the kind of person who always wanted to read a book’s ending first, because she didn’t want to waste her time reading a story she didn’t like the outcome of (no matter how much it annoyed her literature-savvy family). She believed there was no such thing as a truly empty tank of gas (despite the frequent “suggestions” of the low-fuel light), and stranded her little blue Ford Escape on many a hill trying to prove that fact. She was stubborn, strong willed, and independent, and if someone wasn’t doing something the way she knew it should be done, she wouldn’t hesitate to let them know. But she was also a sensitive and tender soul, who accepted strangers into her home as family, and strove to make all feel comfortable and welcome there. She was a caring mother who always knew when to be supportive and understanding, and also when to say what needed to be heard, even if it hurt. She was a loving wife, who would roll her eyes and shake her head whenever her husband called her the most beautiful woman in the world, but secretly smiled every time anyway. She was a wonderful person who improved the lives of everyone she came into contact with, and never failed to lend a helping hand and dole out sage advice to anyone in need. Luisa was known as much for her scalding sense of humor and no-nonsense attitude as for her natural leadership skills and warm bedside manner. She enjoyed her work and met many lovely people whom she cherished as friends and colleagues, and although she tended to see the glass as half empty rather than half full, her presence in the lives of those who knew her certainly filled their glasses to the brim.

Luisa had always wanted to be an astronaut, but unfortunately could not pursue that dream due to her eyesight. She loved space and the thought of exploring the unknown, which is the inspiration behind the quote she chose to have inscribed on her Celestis capsule: IN IGNOTIS; or, Into the Unknown. When we first informed her of our somewhat crazy notion of sending her ashes up into space to float around for a while before returning to the atmosphere in a blaze of light like a shooting star, she was truly overjoyed for the first time in months. We joked about being able to tell people that we knew she was still with us (“In spirit?” “No, right overhead!”), but all joking aside, it was clear that this final adventure would bring her a great deal of happiness. We knew that this was the best way we could honor her memory, while also allowing her one last chance to do something she had always dreamed of doing. We hope she enjoys her trip, and we know that she will be watching over us forever from the great beyond.