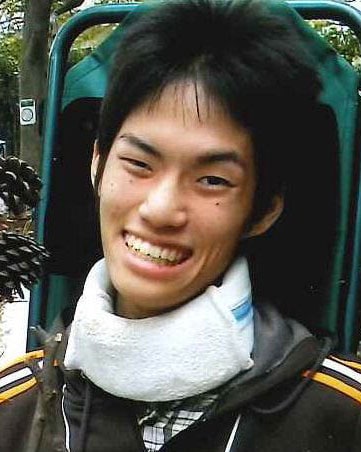 Meguru Enomoto was born in St. Mary's Hospital in Shinjuku, Tokyo on October 3, 1989. He was cheerful and friendly in nature, and loved Japanese comedy shows, football and chess. He first noticed something wrong with his body from about 5th or 6th grade in elementary school, and was diagnosed with spinocerebellar degeneration. It was the same progressive illness that afflicted his mother who died when he was very little.

When he was in high school, walking became much more difficult for him.
He was gradually forced to commute to and from school in a wheelchair. High school is not compulsory in Japan, so there was no public assistance system to provide professional caregivers for his school life. For that reason, he had to rely on volunteers for this, and he could not attend school when they were not available, although he wanted to go to school so much.

This was the basis of his decision to start a civil movement in the hope to create a system of school care. This movement, which spread among his classmates, friends, and various concerned people, moved the local administration. Finally, a system of attending-school care was made in Nerima-ku, Tokyo. Nowadays, many students with disabilities in Nerima-ku use this system.

After he successfully graduated from high school, he was involved in many activities. He had repeated discussions with the local administration regarding the creation of a barrier-free environment, and held lectures for on-site training in the use of wheelchairs in the local elementary school. Sometimes he was invited by a welfare university to talk about how he faced his handicap in his life as a student.

In such activities, he gradually began to dream about his future, such as learning psychology at university and helping people with disabilities lead self-supporting lives by benefiting from his experience.

However, in the midst of pursuing his dream, he suddenly stopped breathing due to the progress of the disorder, and never returned on March 7, 2013 at the age of 23 years and 5 months.

He always faced his handicap squarely in his lifetime, and he was a great contribution to the welfare of his community.