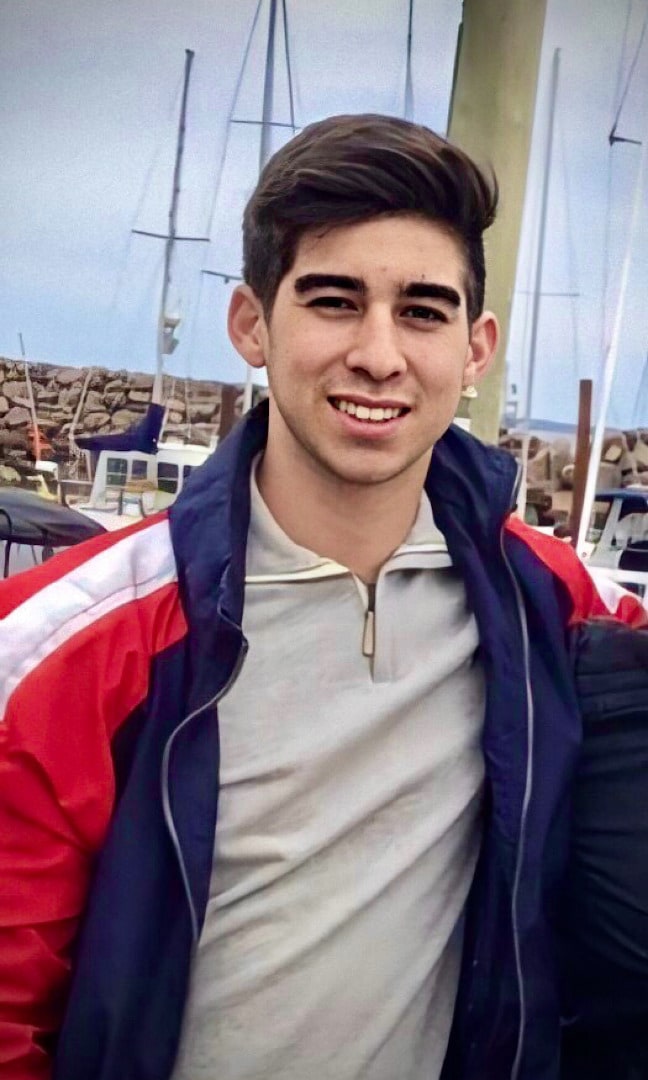 Liam Anand!?! He came into this world in a strange and mysterious way, one could say! Born at 2:22 pm, on the 2nd of February (02), 2002, in Moncton, New Brunswick, Canada. He made it in the newspaper with his picture and all. They wrote that he was a “special” and lucky baby! “Must have came here on a specific mission with a sequenced number like that”,  I thought. Special?! Was he, Ever! And, lucky?! Well, that’s Us! We were the lucky ones really.

On his short and brief journey, here on Earth, Liam, surely made every minute count. Like a little force fueled by curiosity and a taste for the Whys and Hows of life. He was relentless and kinda drove us nuts at times, if I’m being honest here. Being small in stature and being the fourth child in a line of five, he certainly fended for a spot and a voice in this busy household. His larger-than-the-Room personality is what compensated for his size. He shared his journey here on Earth with two sisters and two brothers: Manisha, Malik, Kassie and Andrew. And, Us, his parents: Sanjiv and Nadine.  He lived a pretty normal suburban life here in Dieppe, New Brunswick where we lived all through his life and, still are. He was a very busy guy doing many different things. He liked playing hockey, which he started late, at 13... but don’t be fooled. He was a mighty defence. He also liked badminton, Legos, scooters, skateboards, biking, snowboarding, building things. But, what he mostly loved though, was being outside: enjoying a campfire he had put together, fishing with his grandpa, riding his scooter with his friends and riding his motorbike. He loved being out there! Being out with the Elements. Just being Free like the wind.

At school he liked science and math. He was pretty good at it as well. He had a penchant for business also. A gene he inherited from his grandma. He had in place a plan to do all his science courses and advanced maths before graduating high school. His best friend, Will, and himself, had plans larger than life. They were to do mining out there in space: on asteroids to be more specific. When he would talk about that, his eyes would light up and he’d get all excited and could not spill enough words to explain all of his ideas brewing in his head. I thought it was quite extravagant and outside the box, but he had pretty much convinced me that it was possible.  He could not wait for me to see that, one day.

Will graduated this summer. He is going into astrophysics and will carry the torch for both of them. Well, at least try and carry their dreams with him.

One day, I was just preparing supper, the mudroom door opens! I hear Liam drop his school bag, jacket, shoes and in his I’m-in-a-hurry-cuz’-I-got-places-to-be walk and tone, he announced to me: ”Maman!! just want to let you know, if there’s a mission to Mars and they need people to go, Will and I, we are going. That could also mean that we are not coming back so.... I’m sorry but!!” I looked at him, while still stirring my pot and said: “Ok.... “ He then turned around and carried on with his firm decisive footsteps with his “mission”. I thought to myself: ”Who is this Guy ?! Wow!“ His ideas, his courage, his strength, his energy, his curiosity; they always impressed me. Fierce Soul packaged in a beautiful freckled little Boy.... My little Boy.

Through his time here, he’d questioned a lot of my thoughts and my beliefs. He often made me doubt my convictions. In particular, the religion. He always wondered how we could believe in all of that without real proofs. He told me that he rather believes science; More in the ideas of Forces & Energies. I somewhat agreed with him. And, told him that he was free to believe what he wanted. At the end of the day, there is only One Force, anyway.

Liam’s heart was beautifully sensitive. He wore his emotions on his sleeve. He spoke the truth. Well, His truth! He was straight up with his opinions. He’d give it to you even if you did not ask. If you needed something to be done right!!? you’d ask him! He took pride in his work. His energy was endless. Probably renewed from being mostly outside. He was full of life... Matter of fact, he was the Life of this family. And, from what I heard, he was also the life of his circles of friends. Circles in plural, that’s right! Because, e had so many friends. No discrimination on his part: younger, older, same age, girls, boys, all ethnicities, popular, underdogs. He had more friends than most of us will gather in our lifetime.

What always amazed me, and, it made my heart so proud, is that Liam would often come up to me and say: “there’s a new student at school.” He’d tell me all about him. He made some very good friends like that: by just walking up to the new guy in the class or in the schoolyard and try to include them. Just say: ”Hey!” Open the way kind of. Some of his friends still keep in touch and visit once in a while. I think that’s Liam sending his most trusted Ones to check up on his earthly Tribe. It makes my heart smile and glow. I’m grateful that he made such good bonds with so many good humans.

Although not long, Liam’s life was filled with Love, Adventures & Intensity. I think He taught all of us to live life to the fullest. Don’t waste time on mundane, small, insignificant things. Dream outside the box. Be your Own Unique self. Don’t follow the mass or the herd. Speak Your truth. Include All. Forgive. Love hard & unconditionally. Just Love. Just Be.

Liam passed away and transitioned on the other side on the early morning of July 17th in a motorbike accident. He had had a beautiful day and evening here in his backyard with some friends. It was a beautiful and quiet night when his name was drawn to return home. It was so sudden and tragic for us. Time stood still for the longest time... Shattered and barely alive we kept believing in our Bond & Love. It slowly fed us and we rebuild somehow. Different, forever altered but mended just the same. Faith, Love & Resilience is key to surviving Tragedy. We do everything we can to elevate Liam’s spirit, make him smile and maybe he elbows the soul next to him and says: ”Yeah! That’s my Crazy Team!! Nuts, eh?!” Maybe. Liam went out, as he came in, in a strange, a mysterious way. His Exit from this world, as his Entrance into it, made it into the newspaper. Like a Star if you ask me.

For now, Liam is going to the Moon. Wherever we will be in this world: his siblings, his family, his friends, will only need to look up at the Moon and Smile! And, for Mars!? Well, Will!! We are all cheering for you in hopes that you do make it there and, perhaps take some of Liam’s remnants with you. No pressure. Just cheers! Your destiny will be your destiny.

I am proud to have met Liam. Proud he picked us as his family. Grateful for all he has taught us. Thankful that God gave him to us to complete his soul journey. I will continue to speak his name and keep him in everything we do here as a family. Forever in our hearts. Forever connected through realms with our Never Ending Love. Soul to soul.... See you later.
To the Moon & Back!!
Infinite Love.... maman & papou Xo

“ .... but, how do you know for sure that there is something after this?! How certain are you?!.....” ~ Liam Anand, 8 hours prior to the accident and a few times through his short life.

“worry pas!!” Liam winking and smiling as he would steer away in a I’m-late-for-not-sure-what walk.