He was born in Hollywood on May 1, 1919 in the heart of the burgeoning film community. His mother was the noted writer and actress Bess Meredyth and his father the actor and director Wilfred Lucas. John got a taste for location shooting early in his career, when at seven months of age he went with his parents to Australia to film the first full length film made down under, The Man From Kangaroo written by his mother, and directed by and co-starring his father.

When the family returned to Hollywood, his parents worked both individually and together, but when Bess was sent by Louis B. Mayer to Rome to try to save the floundering production of Ben Hur, John was left with his father and his nursemaid. Bess's long stay in Rome saved the picture, but did not bode well for the marriage. Although they divorced when John was very young, his parents’ parting was amicable. He lived with his mother, but he saw his father often when shooting schedules permitted.

When John was ten his mother re-married, to a Hungarian director newly imported from Europe by Warner Brothers named Michael Curtiz. At the time, John was more concerned with avoiding an education at a seemingly endless string of military schools than dealing with a new stepfather. Despite his best efforts, John learned enough to know the value of books, and became an avid reader, often reading a book a day even when working on a film.

After brief appearances at UCLA, the Pasadena Playhouse School, and, during World War II, the US Army, John began professional life as a script clerk at Warner Brothers, often working on Mike Curtiz’s films. It was not until he began writing and directing, however, that John found a purpose in his work. He also found a young Australian actress, another import at Warners. She was born Joan MacGillicuddy, but Jack Warner re-christened her Joan Winfield, and put her under contract to the studio.

John was also impressed. He and Joan married in 1951 and had three children, Elizabeth, Victoria and Michael. John continued writing and directing, now concentrating on the growing television industry in such groundbreaking series as Medic, The Loretta Young Show and Disney’s Zorro. In 1960, following in his parents’ footsteps, he took his family to Sydney to make the first international TV series shot in Australia, Whiplash, starring Peter Graves.

Returning to Hollywood, John wrote, directed and produced such classic television series as Ben Casey, The Fugitive, Mannix and the original, cult-creating Star Trek. For five years he spent several months a year on location in Toronto on the syndicated series Simon Locke (later called Police Surgeon), and following that continued his love of location work with a round-the-world documentary on world hunger.

In 1978 Joan died after a long battle with cancer. In 1980 John met businesswoman Patricia Hightower at a party, and several months later they married. They moved to the beach, where John wrote on series such as Six Million Dollar Man and Planet of the Apes, and where he could indulge his lifelong love of sailing. He also wrote and directed Yeshua, a film shot in Israel, so he was able to introduce Pat to life on location.

For years his children had been begging him to write down the stories of family history that had been told and retold over riotous family dinners, and he finally began work on this book in 2000. Wonderfully, the collaborating with his children on these stories over the next two years brought them all even closer together. The book finished, and surrounded by his family, John died on October 19, 2002. 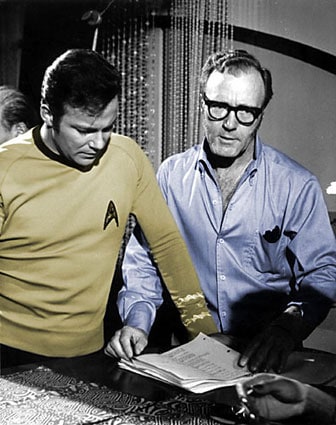