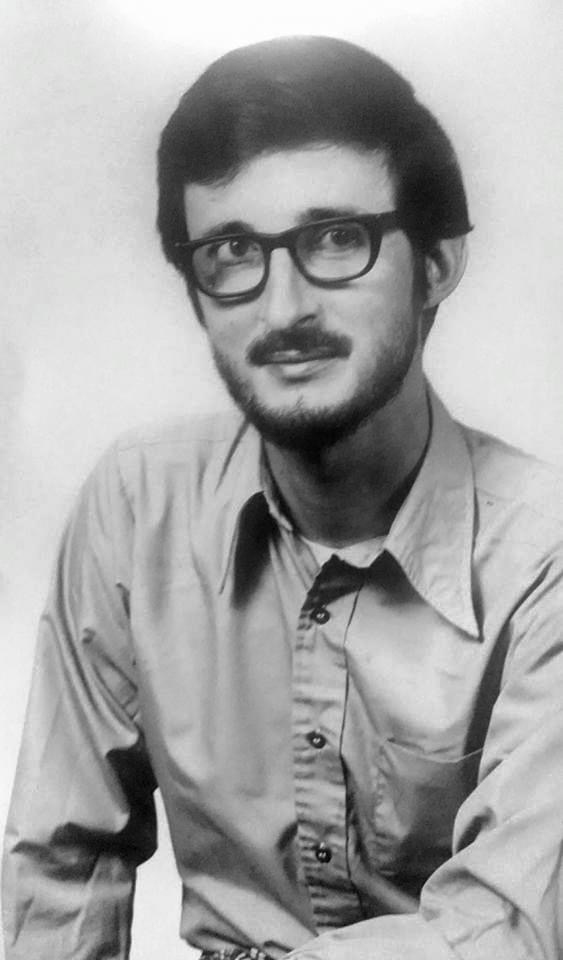 How do you eulogize James Marsh? He was an icon unto himself. Everyone who knew him has a very vivid picture in their mind of who he was. Even people who didn't know him knew him. When I was at UWF, and other students found out my dad was a professor, they might not know him by name, but they knew exactly who I was talking about when I described him: big, black beard; Greek sailor's cap; black leather jacket; boots; walking to the Commons and reading a book at the same time. "Oh, yeah, that guy!"

My dad was a storyteller. He loved to tell us about his childhood in Ohio, on Winding Hill. About his family from Slovakia, or going down to the "crick," or being confined to bed with the measles alongside his brother Steve and picking a fight over whose spots were bigger. He had stories about his motorcycle trips, about bears he encountered while camping. If one of us experienced something unusual, he wanted to hear the story.

So many people who knew my dad have been sharing their stories and memories of him. We are so grateful. In the last couple of weeks, we've learned things we never knew about him. How he was the drum major in the marching band at Warren Consolidated High School, and later he played with the Wheeling Symphony. We knew he'd played the clarinet as a student, but drum major? Symphony? Huh! Whodathunk it?

Makes sense. I only knew him for the past 42 years, and he had 43 more before that to do things like play in symphonies.

I'll tell you some of the stories I remember.

My dad told me that if he hadn't gone to college, he would have become a TV repairman. I'm sure he would have repaired the Dickens out of some TVs, but as we all know, he took the college route. After he got his PhD at Johns Hopkins, my dad got a fellowship to study for a year at Oxford. After that, the University of London hired him for a year to teach and research at Queen Mary College. One story he told about his time in London is how he met JRR Tolkien.

He was a big fan of Tolkien, and somehow he found out where he lived. I think he said he just looked it up in the phone book, where it was listed just like anybody else's. He went to this house and walked up a long, winding walkway, straight to the door, and just knocked. And JRR Tolkien answered. My dad told him what a big fan he was and asked if he could have his autograph. Tolkien said sure, but my dad hadn't brought a book with him. So Tolkien produced a piece of paper and signed his name three times, once for each of his books my dad had back at home. And that was that.

That story is kind of a perfect summary of my dad. He was blindingly smart, so he was in England to study at Oxford. But he was also not terribly concerned about social mores, so he marched himself right up to the front door of JRR Tolkien to ask for his autograph.

My dad did what he wanted to do. No tin a way that hurt anyone else or didn't consider others in the ways that matter. But he wore the clothes he wanted to wear. He listened to the music he wanted to listen to. He pursued the things that interested him:perfecting his recipes for Hungarian goulash, piecrust, and biscuits. Photography. Drawing. Music. Folk dance. He went where he wanted to go. He ate the sub he wanted to eat - every day, for years, on end, so that the kids who worked in the cafeteria knew his order and had it ready by the time he got to the counter. We may have teased him a little for some of this, but he didn't care. He didn't care what anyone thought. Or more accurately, he just didn't even think about what anyone else might think about his own choices. It was of absolutely no consequence to him.

Growing up with James Marsh for a dad was...pretty awesome. A charmed childhood. He shared all of his unconventional interests with us. He took us to the Greek festival every year, and he always led the dance line. Everyone there recognized him from year toy ear, and they all assumed he was Greek! He took us to the opera, and camping. In our family, for your birthday, you could choose to have a party or to go on a"date" with my dad, where he would take you out to dinner wherever you wanted, to a movie of your choice, and to the mall to buy whatever your little heart desired. Those were some of the best times. I remember him taking me to see Troop Beverly Hills, which he actually enjoyed! He said he liked it because "they didn't cheat, and they didn't quit."

A lot of people have told us how much my dad cherished being a dad. A family friend told me,"It was so obvious how much your dad loved his kids. When you were born it was like a revelation to him how much he loved being a dad. Judy said he called his mom and said now he understood why she had so many kids. I think she laughed and said that wasn't the only reason!"

He told me that the night I was born, he went to bed with a smile on his face. And when he woke up in the morning, he was still smiling.

He taught us "camping manners." The first time we took a camping trip as a family, before Jake was born, when the three of us girls were very little, he advised us ahead of time that when you go camping, you have to use "camping manners." So no picking on your sister, no shoving, no hogging all the good chips. You know: camping manners! Apparently, observing camping manners is much more enjoyable than just regular manners, because he said we were sweet little camping angels the whole time. He invoked camping manners again for road trips and family outings in public. Powerful stuff.

He did all the dad stuff: read bedtime stories, gave baths, changed diapers. He told me he never minded changing diapers because the babies always seemed very appreciative. He shuttled kids to ballet lessons, scout meetings, and tee ball practice, took us on road trips, the whole nine yards. It's just that when he wasn't with his family, he was teaching quantum mechanics or writing research papers about optics.

At home, my dad could often be found "calculating." He'd sit in his chair, maybe with a cup of tea, puffing on a pipe and holding a clipboard filled with blank typing paper. He'd sit there silently thinking and occasionally scrawling strange physics hieroglyphics with a fountain pen. You couldn't disturb him during that time, and you certainly couldn't understand a single bit of the chicken scratches on his paper.

A few years ago, I Googled my dad's name just to see what would come up, and I found all these published scholarly articles he wrote. They are incomprehensible to me. For example, he had an article int he American Journal of Physics in1982. The title was "Magnetic and electric fields of rotating charge distributions." "The calculation of the magnetic field of a rotating spherically symmetric charge distribution in terms of its electrostatic potential..."

My dad wrote that, and a journal published it, and other physicists have cited it in their own research. I have no idea what any of it means. I was an English major. Maybe it skips a generation. My daughter will be taking physics in the upcoming school year...

But see, even though he was writing about electrostatic potential, he still came home at the end of the day and was just our Daddy. That article was published in 1982. I bet that same day he marched around the family room with me while we sang "HiHo" from Snow White and the Seven Dwarfs.

He was famous for his recitation of the Hillaire Belloc poem, "Jim,Who Ran Away from His Nurse, and Was Eaten by a Lion." I have a video of him saying part of it, but I can hear it in my mind just as clearly. He recited it with such gusto. It was the same way he told his own stories and our family's stories: with feeling, inflection, maybe just a little embellishment. I hear that's how he taught physics, too.

My dad's dad died in 1994, and his mom died in 1996. After his mom died, I remember him saying,"Do you know what this means? I'm an orphan." I wanted to say something reassuring, soI said,"You still have us!" He said,"It's not the same." I understand that now. Your position in the family you make is nothing like your position in the family that made you. Your family of origin gives you your identity, at least if you are lucky. It decorates your character and informs the individual you end up becoming in the world. The four of us hit the jackpot on families to come from. My dad was an incredible man, and we'll be telling stories about him for the rest of our lives.

What is a eulogy but a collection of stories and the fond feelings they provoke in their retelling? So this is how you eulogize James Marsh. Remember the stories. Write them all down. Tell them over and over. With gusto!