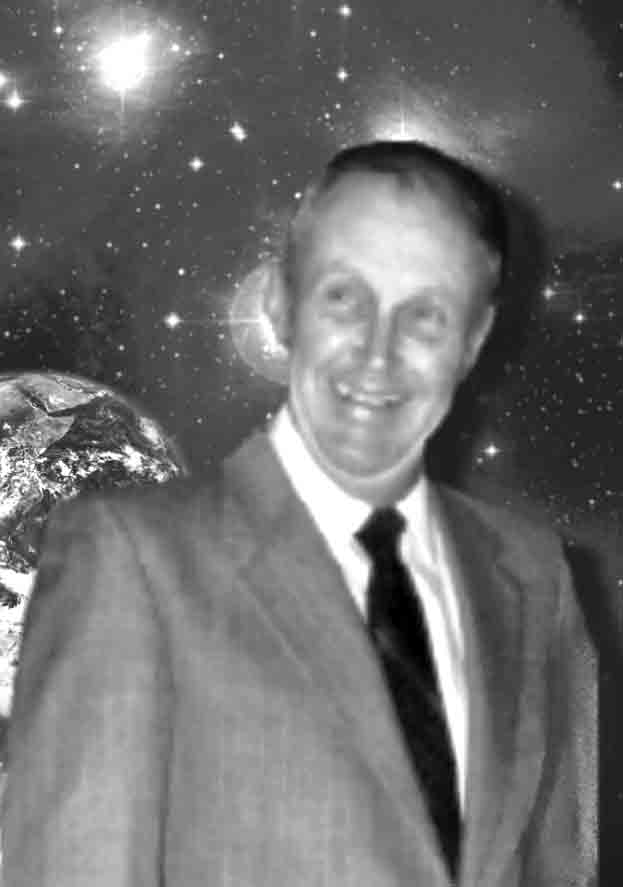 "Jim was really a gentleman. He cared about people. He believed that everybody should have a break, and if it was up to him, he gave them a break. I have never heard him say anything bad about anybody."--John Cherry, friend.

Jim was born in Perry, Iowa, and moved to Des Moines when he was in high school. He became interested in flying at the age of seven, and five years later he earned his first airplane ride -- the prize for running a successful paper route for the Des Moines Register and Tribune.

After World War II he settled in Milwaukee. He moved to Brevard County, Florida in 1965.

He was a member of the Order of Daedalians, Spaceflight 6, the P-47 Thunderbolt Pilots Association, and the Air Force Association at Patrick Air Force Base.

A lover of golf, Jim was a charter member of the Suntree Country Club in Melbourne, Florida, where he served on many committees.

Jim was a founder of the Celestis Group in Melbourne. In the fall of 1983 Beauford Franklin (who also flew on the Founder's Flight), John Cherry, and Jim formed Celestis -- the first company to offer a space funeral service.

Men, my brothers, men the workers, ever reaping something new:
That which they have done but earnest of the things that they shall do:
For I dipped into the future, far as human eye could see,
Saw the vision of the world, and all the wonder that would be;
Saw the heavens fill with commerce, argosies of magic sails,
Pilots of the purple twilight, dropping down with costly bales;
Heard the heavens fill with shouting, and there rained a ghastly dew
From the nations' airy navies grappling in the central blue;
Far along the world-wide whisper of the south-wind rushing warm,
With the standards of the peoples plunging through the thunder-storm;
Till the war-drum throbbed no longer, and the battle-flags were furled
In the Parliament of man, the Federation of the world.

As a combat pilot, Jim Kuhl was a heroic member of the U.S. Army Air Corps, and lived to see the furling of the battle flags of both the Second World War and the Cold War. He dipped into the future with his vision of Celestis, foreseeing a time when the heavens would thrive with commerce. He was a space entrepreneur who, as a part of the Founders Flight, will sail in the purple twilight of the skies.