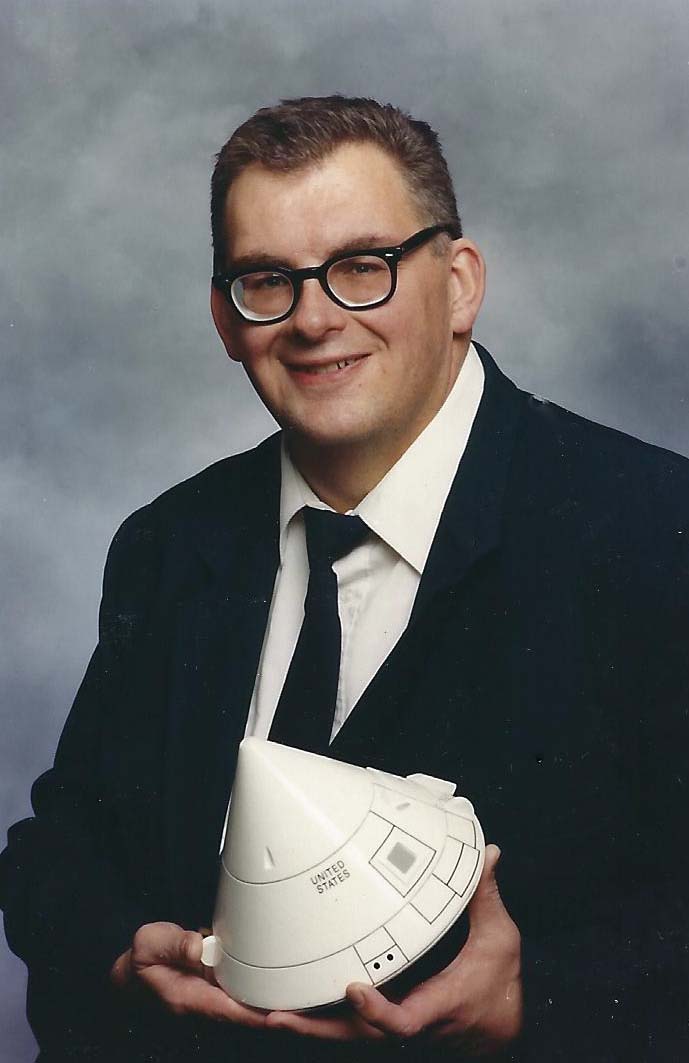 Ever since Jim was a small boy he had a love for aerospace. Every book Jim read he absorbed like a sponge. Every model he collected enhanced his love for all things space. From the X-15 to the Falcon 9 Jim could speak on any related subject such as type of fuel, speed and all the statistics related to spaceflight.

With all this knowledge and love for the subject, Jim’s favorite passion was to broaden the knowledge of young minds. While discussing the different aspects of spaceflight history and current spaceflight events, he would smile at the sparkle in each child’s eye as they became absorbed in his words. If he encouraged one young mind to become an engineer or astronaut, then Jim’s light will live on forever.

Jim has been involved in many aspects of spaceflight as a Spaceflight Historian. In 1976 he gave his first public address introducing legendary writer Robert A. Heinlein. Jim helped create the Organization to Support Space Exploration (O.S.S.E.) which recreated Apollo Moonwalks. In 1979, O.S.S.E. became involved with Rockwell International’s Speakers Bureau in Downey, California. From then on, Jim was master of ceremonies for the open houses and astronaut visits to the Downey plant until it closed. In 1984, he was hired as a museum assistant at the California Science Center in Los Angeles, California, where he was employed for 19 years.

Among his many accomplishments Jim was a technical advisor on the Tom Hanks HBO mini-series “From the Earth to the Moon”. He also appeared in the episode “Spider” of “From the Earth to the Moon” as the pencil tapping Lunar Module Designer of Apollo-9. In addition, he was a consultant on other films and TV productions such as “Apollo-13”, “Race into Space”, and “Salvage One”. He worked at the Space Frontier Foundation, Xcor Aerospace, he was on the History Committee for the American Astronautics Society, and he was a contributor to Apogee Publishers “Mission Report” book series. Jim was also an educational advisor and consultant for various aerospace related projects. He has been awarded various honors and awards from the Aerospace Community including an Honorary Doctorate degree in Space Science Information from the California Museum of Science and Industry, making him a Doctor of Space Science.

In 1996, he joined Aerospace Legacy Foundation, a non-profit organization dedicated to the preservation of aerospace history in California. Just before he died Jim was elected President to the Board of Directors of ALF. Although he was unable to serve due to illness, he looked forward to using his experience and knowledge in the field of aerospace to preserve, educate and archive all things spaceflight related.

He is survived by his wife Arlene and sisters Lex and Christy, plus many, many friends that made up Jim’s world. His loss will have a rippling effect for years to come and our existence has been forever changed for knowing him.

Separated by dimensions but not our love.