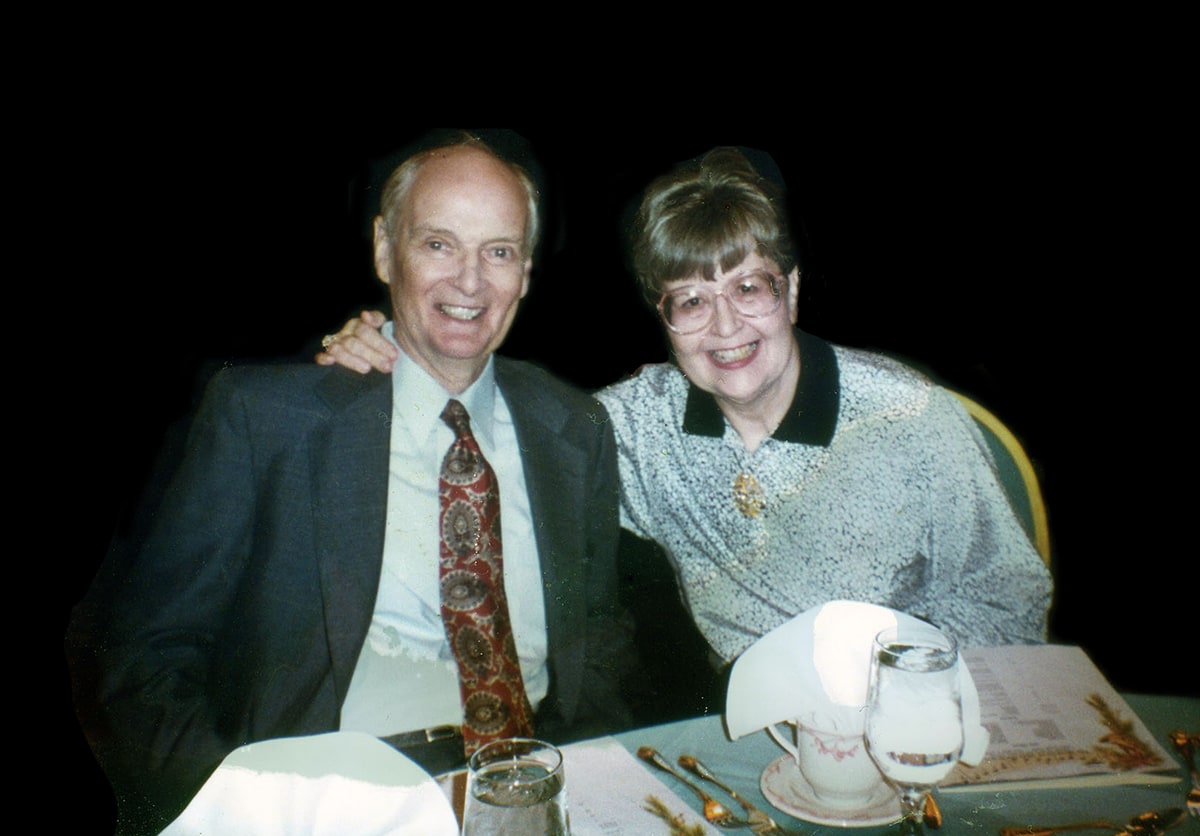 David Charles Napier Webb, Ph.D. (November 20, 1928 - October 1, 2016) was born the fifth child and second son of Gordon and Cornelia Mary Webb at the family home, Curraghbawn, in County Tipperary, Ireland. The Webb family had a passion for adventure, and David was no exception. As a toddler, he wandered rural Ireland freely. At school, he set records as a bowler in cricket, as a sprinter, and as a swimmer. He was also the favorite story-teller in his dormitory, inventing stories about space travel. David’s brother, Patrick, served in the RAF during World War II, as had their father, Gordon, during World War I, inspiring David’s passion for flight. His sisters, Pamela, April, and Rosemary, also served during WWII.

David was a competitive motorcycle racer after World War II, was offered a chance to “go pro”, and was simultaneously a rising-star employee at Avery Scales, in Dublin. He left both opportunities behind, joining a team led by famed Irish sailor Tony Jacob to build a sailboat, with intentions to sail to the south Pacific. The young men named their craft the Aisling – Irish Gaelic for great dreams, and a term that set the theme for the rest of David’s life. Several months, and many life-threatening moments later, the Aisling arrived in Puerto Rico, where U.S. Coast Guard personnel, concerned about hull damage, put an end to their voyage.

After a brief stay in Puerto Rico, David started a business in Antigua, diving, without gear, pulling lobsters off the ocean floor and providing them to U.S. restaurants. Next, he hitched a ride aboard a 21-foot sailboat, the Icebird, on its way to Canada, where one of his sisters had relocated.

He embarked on more adventures in Canada, driving long-haul trucks, working as a civilian during the early development of the Distant Early Warning (DEW) line, and as a storekeeper inside the Arctic Circle. David and a professional geologist were tasked with creating the first ever map of the Arctic Red River – and with gathering rock samples to be tested for indications of oil-rich areas. Their home for six months was a pair of canoes, lashed together. He also performed in a Calgary theatre, and was offered (and turned down) a screen test for films. Eventually, David enrolled in McGill University in Montreal, earning a B.A. in Political Science and an M.A. in International Relations. He and Heather Wood married and became the proud parents of Geoffrey and Andrea Webb (now Weld). In 1971, he received a Ph.D. from the University of Pittsburgh, focusing on International Development and Education.

While in Montreal, Dr. Webb served as the Director of Research and senior staff member of the J.W. McConnell Foundation, with responsibility for evaluations for the foundation's multimillion-dollar annual grants program. He also represented the Arctic Institute of North America as official delegate to the First United Nations Conference on the Environment held in Stockholm in1972. He worked with Barbara Ward and Margaret Meade to organize the non-governmental agencies' important contributions to this seminal event.

He continued working at the Foundation after the end of his marriage. It was there he met, and later married, Liliane Pinto (nee Lehman) who also had two children, Benjamin and Monique. The family moved from Montreal to Washington, D.C., to allow Dr. Webb to follow a passion held since early childhood – as a proponent of space exploration, policy, and law.

In 1985, Dr. Webb was appointed by President Ronald Reagan as a member of the National Commission on Space. The 15-member Commission was mandated by Congress to prepare a visionary fifty-year space agenda for the United States. The Commission included luminaries Dr. Buzz Aldrin, Neil Armstrong, Sally Ride, Dr. Gerry O’Neil, Chuck Yeager, and others. The Commission held hearings throughout the nation, nine of which were hosted by Dr. Webb. The official Commission Report, Pioneering the Space Frontier, was made available to the public by Bantam Press.

Dr. Webb served as a consultant to many different organizations involved with space, including NASA, DARPA, and ESA. He was a founding director of the International Space University, and helped found Students for the Exploration and Development of Space, and the Zero Gravity Corporation. He taught space policy at the University of Central Florida and Embry-Riddle University, Daytona Beach, Florida. At the request of astronaut Buzz Aldrin, Dr. Webb created the nation’s first graduate program in Space Studies at the University of North Dakota, and consulted or lectured at Harvard, Stanford, MIT, CalTech, and many other venues.

Dr. Webb served as Chairman, Non-Governmental Organizations in Consultative Status with the United Nations Conference on the Exploration and Peaceful Uses of Outer Space, Vienna Austria, August 9–21, 1982 (UNISPACE 82). During the early 1990s, Dr. David Webb chaired the Senior Executive Space Forum, and served from 1992 through 1996 as one of six members on the Scientific and Engineering Council of the Universities Space Research Association.

Until his final illness ended his plans, Dr. Webb and his partner were developing a research program regarding geo-political, technical, and economic aspects for the development of space-based solar power.

Among his many awards were:
* Lifetime Achievement Recognition from the International Space University/International Singularity University, 2009.
* NASA/DOD, National Aero-Space Plane Program: "For Outstanding Vision of the Impact of Hypersonic Technologies on the World Economy and Support of the National Aero-Space Plane Program." (1990).
* International Space University: "For Outstanding Dedication and Leadership of the International Space University During its Critical Launch Phase 1987-88." (1989).
* First Frederick E. Osborn Award—International L5 Society: "For leadership in building an international pro-space movement." (1985)
* Students for the Exploration and Development of Space (SEDS): First Arthur C. Clarke Award, "In recognition of outstanding personal contributions in education towards the peaceful uses of outer space." (1983). (Dr. Webb was the recipient of the Award immediately prior to Carl Sagan)
* Government of Canada, Queen Elizabeth II Silver Jubilee Medal: "In appreciation of worthy and devoted service." (1977)

Lilly Anna Maria Gertrud Pinto Webb (nee Lehmann) was born on 9 August 1931 in Berlin, Germany. A woman of many talents, Liliane was an accomplished scholar, linguist, historian, artist, and prolific writer. As a child, Liliane was given the care of her even younger brother, Claudius and sent from Berlin with instructions to “walk till you get somewhere safe”. The two children walked more than 200 miles to a farm, where they endured life as farm hands and kitchen slaves until World War II ended. Liliane’s keen observation of the events in Germany made her particularly interested in the lives of Jews then, and during earlier centuries – an interest which eventually became the focus of one of her books.

After the war, Liliane graduated from an interpreter’s school in Stuttgart, Germany. She was a noted linguist, fluent in French and English, as well as her native German. Her early career took full advantage of her ability with languages, as she worked for the World Health Organization and other international groups.

Liliane moved to the U.S. in 1957, married Albert Andre Pinto, Ph.D. converted to Judaism, and became the mother of Benjamin and Monique Pinto. Eventually, separated from her husband, Liliane moved with the children to Tangiers. The family spent a great deal of time in Spain as she researched the fate of the Marranos, the Jews who hid their faith and pretended to be Roman Catholic converts during the brutality of the Spanish Inquisition.

Moving to Canada, Liliane was appointed director of the Potter’s Club, which she led into its incarnation as the Visual Arts Center of Montreal, now known as one of the preeminent arts centers in Canada. It was her efforts in support of Montreal artists that led her, eventually to cross paths with Dr. David Webb.  At the time, Dr. Webb was working for the McConnell Foundation, then one of the largest charitable foundations in North America. He reviewed grant applications, including one Liliane had written. Both were separated from their first spouses. Both recalled years later that, “an actual physical spark” shot between their hands as they greeted each other in his office. Each remembered that moment as the one in which they both knew they were destined to be together.

Dr. Webb and Liliane married on December 7th,1974. He’d had an interest in space exploration even in his early childhood. He was spending every spare minute working from Canada to find some way to assist the growth of the American program. It was Liliane who finally suggested they leave Montreal for Washington, D.C. because, “It would be less expensive to live there than to pay the phone bills he was creating.”

Liliane continued to pursue her interests in art and history in Washington, then added yet another dimension to her career. She became actively involved in the Democratic Party and took a particular interest in environmental issues. She actively supported the Alliance to Save Energy, formed in 1977 by Senator Charles Percy and Hubert Humphrey. Her activities on behalf of the Democratic Party led to recognition by President Bill Clinton, Senator Percy, and others on, “The Hill” as well as Donald J. Fowler, then Chair of the Democratic National Committee.

Liliane’s best-known work, The Marranos, was published in hardcover in 1980 and released in a paperback edition in late 1981. The book is set in Spain during the Inquisition. Its heroine, Isobel Valderocas, has been raised as a Spanish Catholic but learns, at her mother’s death, that the family is actually Jewish. The reader, seeing through Isobel’s eyes, is privy to the terrors and torture suffered by the hidden Jews. The novel is an unblushing indictment of the behavior of the members of the Inquisition and their treatment of all people, but especially those that were demeaned as “the Marranos”.

Liliane’s death left behind two additional manuscripts, one an extensively detailed comparison of the world’s religions. The other, somewhat prescient and more than a little pertinent today, is, 2028: American Comeback. The book begins with an international gathering of little-known but powerful men, planning the settlement of space by large groups of human beings. It is a combination of pre-history, science fiction, and political drama.

At the death of this remarkable woman, Congressman Dana Rohrabacher caused a flag to be flown above the U.S. Capitol in honor of her life. Perhaps the very best summation of Liliane’s life is that written by Dr. Webb himself, to be read at the celebration of her life:

“Liliane, you were a totally selfless, courageous being. A person of absolute integrity, a wonderful wife, mother, lover, soul mate and best friend.”