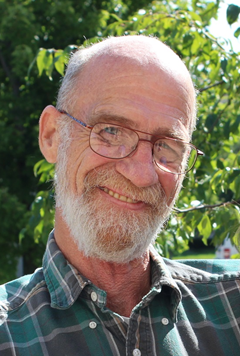 David Wesley Staup of Granbury, Texas, 65, passed away on September 22, 2016 in Ft. Worth, Texas. David was born in South Bend, Indiana on April 15, 1951 to his mother Lorraine and father Raymond, both deceased. He was loved dearly by his stepfather Thomas Manning who is also deceased. He is survived by his daughter Jamie, her husband Jonathan and his grandchildren Madeline and Miranda, as well as his sister Debbie and dear friend Lettie Renee.

Dave was a talented engineer by trade, often referred to as “the professor” in his work. His love for learning, research and teaching was overarching. He spent many years as a youth coach and found great joy in teaching and mentoring anyone who would allow him to do so. His love for science was deep, though his biggest passion was the wonder of outer space. Dave was a pioneer in modern amateur astrophotography, including being published in Sky & Telescope magazine in 2003. Dad always said he would go into space if he was duct taped to the side of a rocket. So let it be so.

- The Family of David Wesley Staup

Dave Staup was a kind man – I met him over 20 years ago through a friend we both knew. He was so easy to talk with and knew so much about astronomy and astrophotography. I had always been fascinated by the stars and the beauty of the universe that I could see but I had never looked through a telescope at that point in my life. So, you can only imagine my delight in looking through his 10” Meade telescope for the first time. I would sit for hours and just ask him questions about the universe and the stars while we looked at everything from Jupiter to Orion’s Nebula through that telescope. He never failed to teach me something every time I got to spend time with him. His passion for the universe and science was amazing and unending. He was also an engineer with an incredible mind. This put him right in the middle of the amateur astrophotography community. He achieved the distinctive honor of being published in Sky & Telescope magazine in 2003. His nickname was “the professor” and while I didn’t know about that nickname until after his passing – it absolutely fits him to a tee. When he would talk about the universe, he spoke in a way that anyone could understand but he would do it without making you feel stupid. I loved learning about telescopes and the stars because he was a great teacher and an even better friend.

One of my fondest memories of his friendship was when I was going through a great deal of stress and anxiety in my life. He knew this and invited me to come down to the lake house because there was a meteor shower that weekend and he knew it would get me out of the situation I was in at the time. We slept all afternoon and then got up at 3:00 am and went outside in the middle of November. We each sat in our lawn chairs all wrapped up in puffy sleeping bags and blankets until dawn watching the stars streak across the sky. We talked a little about my stresses but then just hung out there on the edge of the property looking out over Granbury Lake at the beauty of the night and the shooting stars. It was so cold that we didn’t move much to avoid breaking the heat pockets that our individual sleeping bags provided but I knew he was still awake because every few minutes I would hear him press the plunger on the old 35mm camera to either open or close the shutter. It was exactly what I needed, and he proved that night to be more than a teacher and mentor but also a great friend. AND we got some good pictures that night of shooting stars too.

Now everyone always sugar coats things after people leave us and as my husband always says, “Everyone’s a saint after they die.”  😊 Dave had his …. Let’s call them idiosyncrasies – You had to know him to understand his mind. Like most people who are incredibly intelligent, he was prone to only seeing his point of view but if you learned how to listen and interject thoughts at the perfect moments, he was able to see your point of view most of the time without meaning to.

Dave loved the universe and he taught me so much in the time I was able to know him. He used to talk about wanting to go into space so badly – he would look at me and say, “If they’d let me – I’d duct tape myself to the outside of a rocket to go.” We would laugh but we both meant it. I wanted to thank his lovely daughter, Jamie for making that dream come true for him. Dave may be gone but he lives on in us and he’s finally going to space. 😊