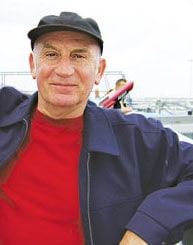 Cornelis J. Simons was a caring husband, father, grandfather, brother, son and friend -- but, his love for all things of the sky, for flight, for Nature, our Solar System, and Space was his calling.

Born in Rheden, The Netherlands, in 1942, during World War II, as his father, Nicolaas Simons, escaped a Nazi German work camp, Cornelis and his mother, Cornelia Matthijssen, four siblings, Jan, Nicolaas, Paul, and Josephina, lived privately, in the south of Holland. After the war, his family moved to Alkmaar, north of Amsterdam, where Cornelis finished Gymnasium (a Catholic honors high school). Drafted into the Dutch Army during Europe’s NATO involvement, Cornelis was stationed in West Germany and gained skills as a bookkeeper. Cor enjoyed the sea, sailing, flying sports, and developed his craft of photography, astronomy, and telescope-making after the Cold War years.

He met and married a young nursing student, Wilhelmina (Helma) Buijsman, after leaving the service. They settled in Heerhugowaard, Holland and raised three children, Nicolaas (Niels), Wilhelmina (Wendy), and Joost. While pregnant with their youngest child, Helma was diagnosed with terminal cancer, and nine years later she passed away. Cornelis was her caregiver and head of the household of three young children. During these domestic days in Heerhugowaard, Cornelis founded an astronomy club, which grew over the years to become the non-profit foundation, Sticthing Saturnus. As chairman, and a keen businessman, he built a public science center in the local park. This facility was equipped with an observatory, telescope-making workshop, and meeting hall where special astronomy activities, club meetings, and courses in astrophotography and computer technology were held. Cornelis was Editor-in-Chief of the organization’s publication, Titan; and he became an avid spokesperson for astronomical events with the local media in northern Holland.

In 1998, Cornelis was knighted into the Sixth Order of Orange-Nassau by the Dutch Queen, Beatrix of Nassau, for his service and public outreach in astronomy. Cornelis honored this distinction, and the public opportunities it allowed, to share his beloved astronomical images and fascination with space. He made friends internationally.

In the early millennium 2000, Cornelis traveled to America to visit a California town in the foothills of the Sierra Nevada mountains. Three years later, through mutual interests in astronomy, he grew a new relationship with an artist and schoolteacher from California, Kandra Kargo. They married in 2007. Cornelis became a permanent resident of southern California after their marriage. Kandra and Cor traveled through the American Southwest, visiting state and national parks, monuments, and astronomical sites from Oakland to Houston, The Arches, Utah, to White Sands, New Mexico, Arizona's desert to the Rocky Mountains. Cornelis closely documented his travels in photographs and news articles.

Kandra and Cor relocated to a home in Fullerton, California where he established a newly-equipped backyard observatory. In 2010, this sunny garden and observatory “paradise” was where Cor convalesced from terminal pancreatic cancer. When feeling well, he would host solar-observing parties there. From this new venue Cornelis advocated medical science, allowed experimental medicine, and bravely fought his illness 2.5 years.

At home, on a sunny morning in May 2012, Cornelis passed. As the day dawned, fledgling Cooper’s Hawks clustered in the tall trees above his home as if to pay him tribute.

Cornelis lived his life looking up; seeing all the nuance of our natural Earth and sky, he deftly captured through his camera lens all glimpses of this vast, ever-changing world. He was inspired by the spectacle and mystery of our universe. His infectious enthusiasm for science, space and technology, as well as his friendly love of children, friends, country, and family are his legacy. He will be fondly remembered, admired, and greatly missed. It is fitting that, aboard this satellite, his remains will orbit Earth, via the Celestial yonder in which he found such excitement, solace and peace.