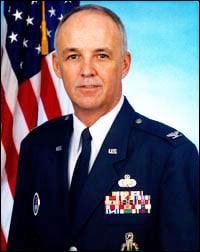 Col. J. Steve Crook was an aerospace professional who was fiercely loyal to his country and to the people he loved.

Steve began his long and prestigious career in the "Air" when he joined the Civil Air Patrol in Ft. Lauderdale, Florida in 1965. There he met BeBe, his childhood sweetheart whom he would later marry. Steve earned an ROTC scholarship and graduated from his beloved Florida State University in 1973. He was commissioned into the U.S. Air Force and served for 26 years.

In addition to his studies at Florida State, Steve graduated from both the Air Command & Staff College and the Air War College. He earned two Masters Degrees -- in engineering and hospital management. He was also a private pilot.

Of his many accomplishments he was most proud of his service as: Director of the Space Transportation Test Team at Patrick Air Force Base, Chief of Mission Operations Systems for NASA, Commander of Shemya Air Force Base in the Alaskan Aleutian Islands and Director of Operations for Air Force Space Command. He retired as a Colonel from Offut AFB in 1999, where he was the Commander of the Missile Analysis Center with Strategic Air Command. Some of the medals he was awarded include: three Air Force Commendation Medals, three Meritorious Service Awards, three Defense Meritorious Service Awards and the Defense Superior Medal.

After retirement as a full colonel from the Air Force, Steve worked with Northrop Grumman on the National Missile Defense Team until 2006.

Steve accomplished so much, all on his own, yet lived humbly -- unless you were discussing his Alma Mater, the FSU Seminoles or the Denver Bronco's! Steve shared his retirement dream with Bebe and they moved to Florida. An avid football fan, in 2013 -- for the first time -- Steve got to enjoy all of the FSU "Noles" home games. He was so happy there!!

Steve was a "quiet" man, sensitive, dependable, honorable and a true "Gentleman." Steve loved the beach and he was in his glory figuring out a new "Techie" "toy" -- the word "geek" might be appropriate :) -- always searching for new gadgets. He was on a first name basis at Best Buy. :)

He indulged Bebe and tolerated her passion for dogs but very much loved all the ones she brought home.

Steve was so loved and is deeply missed _ Steve's dream was to one day go into space; he did not make it in this life but he will be honored in death -- On Eagle's Wings

The eldest of five siblings, Steve leaves two sisters, three children, five grandchildren and many beloved nieces and nephews. His mom, dad and one sister pre-deceased him.