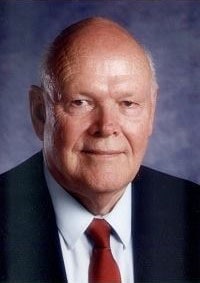 Born on Valentine's Day in 1922, Charles W. Radcliffe ("Chuck") lived 91 plus years and left behind a rich legacy. He grew up in Calexico, California, started his college education at the University of California in Berkeley, and completed it there after joining the Navy's V12 program and serving three years on the USS New Mexico.

During his Navy career, he was awarded three battle stars for action in the Philippines and Okinawa. In 1945, while his ship was docked in Boston, he visited the Arlington Street Officers Club, where the Clark twins, Martha and Margaret, were serving as hostesses. Martha won his heart and they were married February 18, 1946.

Chuck loved sports and music but his talents leaned towards engineering. In 1956 he became a member of UC Berkeley's mechanical engineering faculty. He was a member of the International Society for Prosthetics and Orthotics, invented what became known as the Radcliffe knee and for his many contributions in artificial leg fitting techniques, he received the ASME Machine Design Award.

He traveled the world to give lectures on the theory and practice of mechanism design. The extended Radcliffe family, Clark, Kim, Bill, Lisa and Kevin, were with him when he spent a year in Scotland.

Chuck and Martha loved to travel. His work took him all over Europe, but vacation trips also took them to most of the 50 states, to Mexico, South America, Australia, Japan, and numerous Caribbean cruises. Back home in Lafayette, California, he was forever an inspiration to his five children, 14 grandchildren and nine great grandchildren. An enthusiastic engineer and problem solver, his talents were reflected in his progeny. He provided authoritative advice on any subject, on a moment's notice, and his favorite reply to an offspring seeking help on a given subject was "read the book."

Chuck and Martha also loved to spend time with Martha's twin sister Margaret and her husband Bob. They travelled together whenever they could and especially enjoyed talking at happy hour over a scotch.

Martha left this world on February 23, 2010 and Chuck died December 6, 2013. They are now enjoying happy hour together in the stars.