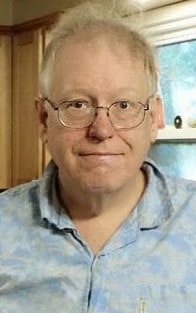 Charles Alan Snipp was born October 5, 1957 to Charles E. and Alma Snipp in Louisville, Kentucky. A graduate of Trinity High School and the University of Louisville.

Charlie loved anything space related – he loved to reference that he was born the day after the launch of Sputnik. Throughout his life he followed all things space related: he knew all the space launches and their numbers and all the astronauts in each ship. He could quote space events like others quote baseball statistics. At one point he even had SETI running from his home computer believing we are not the only life forms in the universe. Growing up he always wanted to be an astronaut and going through his personal possessions we found a handmade space outfit his beloved grandmother had made for him as a costume. His childhood wish was to be a pilot and then an astronaut. A lifelongStar Trek fan and proud to say so!

A self-described computer geek; he loved anything related to computers. He served as “desktop support” to many of his friends and family. Got a computer problem? “Call Charlie!” He worked in sales for many years and midlife he switched gears and made computer technology his profession. Mostly self-taught he surprised many coworkers with his knowledge and ability.

His first love in life was his dogs. He spoke often of his childhood beagles Jingles and Jingles2. As an adult he adopted strays and they were his family. Jingles, Jingles2, Neeley, Molly and Maggie were there to greet him at the Rainbow Bridge we are certain. James T Beagle, Indiana, Stan and Ollie, his surviving canine family, surely look forward to the day they meet again.

Charlie was a quiet, unassuming man and many will never know the impact he had on the lives of others. A gentle soul, he helped anyone who asked without expecting anything in return.

He loved Jimmy Buffett, the Beach Boys, Simon and Garfunkel and Bruce Springsteen. An intelligent man who was an avid reader; he could answer nearly all the questions on Jeopardy. His favorite radio program was Car Talk “Click and Clack the tap it brothers.”

Charlie, you got your wish! You are going into space!

Charles Alan Snipp – you were loved, you will be missed and you will always be cherished.

As you said many times to me “you are my sun in the morning and my moon at night.” I will look up towards the stars and know you are there always.