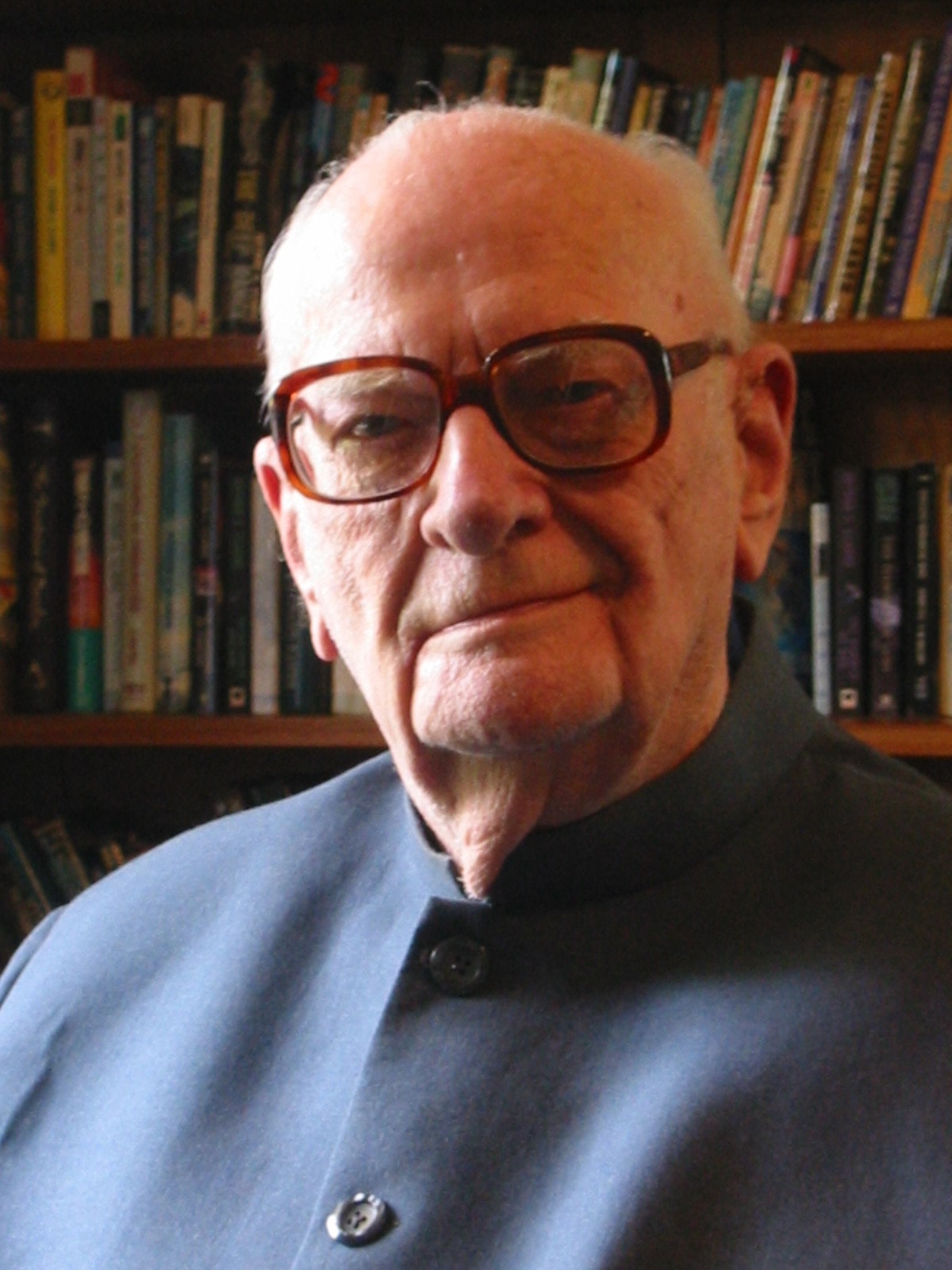 Best known for 2001: A Space Odyssey, Arthur C. Clarke was a brilliant scientist and sci-fi author whose literary works and positive visions of the future have inspired countless people around the world.

Born in 1917 into a British farming family, Clarke developed an interest in science as a child. He wondered at the stars using a homemade telescope, and was fascinated by the sci-fi stories he read. Although he was an excellent student, his father’s death imposed such economic hardship on his family that Clarke could not afford to attend college. He went to work for the British government as an auditor in the 1930s and early 1940s, but his interest in outer space drove him to become a member of the British Interplanetary Society during this same period of his life. During World War II he served as a radar instructor and technician in the Royal Air Force where he used radar to help pilots land their aircraft in inclement weather.

Clarke’s career took off after the war. In a 1945 article entitled, “Extra-Terrestrial Relays,” Clarke made his famous prediction that satellites in geosynchronous orbit would one day be used to relay radio and TV signals around the world. Taking advantage of a fellowship, he graduated from Kings College, London in 1948 having studied mathematics and physics. While excelling in his studies, Clarke also found time to write. In 1946, Astounding Science Fiction published his short story, “Rescue Party.” In the 1950s Clarke published several works of fiction and non-fiction, including Prelude to Space, The Nine Billion Names of God, The Sands of Mars, Interplanetary Flight and “The Star” – a short story for which he won a Hugo Award in 1956. His most famous work from this time period is Childhood’s End, where first contact with ET results in the transformation of humanity – a theme that would appear again and again in his later works, including most famously, 2001.

While he gained a well-deserved reputation as a sci-fi author and an aerospace consultant in the post-war years, he simultaneously developed a strong interest in the world beneath the seas. He therefore moved to Sri Lanka in 1956 where he would live the remainder of his life. He started scuba diving, took underwater photos, and published books about his undersea explorations.

A bout with polio in the early 1960s temporarily inhibited his physical activities, and he focused once again on humanity’s future in space. Beginning in 1964 and working with Stanley Kubrick, Clarke developed the screenplay for his most famous work: the 1968 movie (and book by the same title), 2001, based on a 1951 short story he had written entitled, “The Sentinel.” Clarke would later write sequels to 2001, including 2010: Odyssey Two, 2061: Odyssey Three, and 3001: The Final Odyssey. In addition to his prolific fictional work of the 60s, Clarke would serve as a commentator on the CBS television network with Walter Cronkite covering three of the Apollo missions, including the Apollo 11 landing on the Moon.

Clarke’s creative output continued to blossom in the 1970s and ‘80s, most famously with such works as Rendezvous With Rama and The Fountains of Paradise, both of which won Hugo and Nebula awards. He also appeared in several television series, including Walter Cronkite’s Universe. Complications from polio would limit his mobility once again, confining him to a wheelchair. Nevertheless, he would continue writing, -- often in collaboration with other authors -- eventually penning approximately 100 books and numerous articles and short stories over the course of his lifetime.

In addition to Hugo and Nebula awards, Clarke received many other accolades. For example, in 1983 the Arthur C. Clarke Foundation was formed in Washington, DC, “… to recognize and promote the extraordinary contributions of Arthur C. Clarke to the world,” the Foundation writes, “and to promote the use of space and telecommunications technology for the benefit of humankind.” The annual Arthur C. Clarke award for British science fiction was created in 1986. Clarke was knighted in 1998 and served as the first chancellor of the International Space University. Asteroid 4923 was named in his honor, a dinosaur discovered in Australia was named “Serendipaceratops arthurcclarkei,” and the geosynchronous orbit was named the “Clarke Orbit.”

But perhaps his greatest, long-term insights for the space community are really Clarke’s famous Three Laws that appeared in his 1962 book, Profiles of the Future:

“The only way of discovering the limits of the possible is to venture a little way past them into the impossible.”

“Any sufficiently advanced technology is indistinguishable from magic.”

This last point is particularly poignant, given his upcoming Celestis memorial spaceflight to the Moon. In 1999 American engineer Rick Fleeter traveled to Sri Lanka and collected hair samples from Clarke so that Clarke’s DNA could be flown into space. Fleeter then gave the hair samples to Celestis CEO Charles Chafer. Now with Celestis, Clarke will travel to the Moon -- the site of 2001's second black monolith, which appeared to be magical indeed.

Clarke never outgrew his childhood sense of wonder about our future in space. Indeed, Clarke’s approach to life is best summed up in his chosen epitaph: "He never grew up – but he never stopped growing."