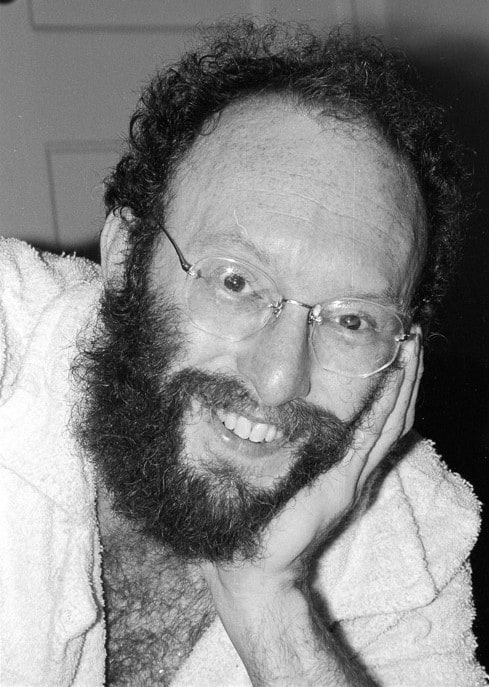 “A lot of things can happen in a micro-second.” - Arthur Abraham in Confessions of an Amiga Hacker

Arthur Mark Abraham possessed an impish humor and analytical intelligence that together inspired his work and infused his life. In addition to his intelligence, Arthur will be remembered for his keen wit and idiosyncratic outlook on the foibles of modern society.

Arthur was born and raised in Chicago by his parents Ruth and Isadore Abraham. Most of his early life was spent in Rogers Park on the Northside, in a neighborhood that borders on Lake Michigan. He grew up in a Jewish family with numerous relatives nearby, many speaking Yiddish as their first language. His grandparents immigrated to the US from Russia and Romania and their experiences added a counterpoint to the dominant American culture. Arthur’s experiences growing up in Chicago created an indelible mark on his world view, even after years of living on the west coast.

Arthur always had a mind of his own. According to family mythology - his first word was "myself". There are many stories of his childhood exploits. In one, he decided at the age of 8 that he wanted to go to the Museum of Science and Industry in Chicago, a fantastic and gigantic museum which he loved. However, to get there required a train journey of over an hour from his home. No matter, he took off by himself to get to the museum. Somehow, with the help of a policeman, he returned safely.

His parents sent him to local community classes for children at the Loyola Field House and it was there that he took an initial class in theater. These classes influenced his continuing interest in storytelling and performance. Anyone who knew Arthur for any length of time probably heard him recite one of these early monologues (or maybe he saved those for his family?).

A brilliant computer scientist who cut his teeth on Burroughs system punched cards (pun intended) and came to know the hearts and souls of many a machine, Arthur described himself in later years as “a reformed Unix Guru.” He was captivated by computers but refused to work in defense, so he worked in financial systems in his home town of Chicago. In Chicago in the 60’s and early 70’s, Arthur was at the heart of those turbulent political times. He was at the 1968 Democratic National Convention in Chicago, one of tens of thousands of Vietnam War protesters who battled police in the streets, while the Democratic Party fell apart over disagreement concerning its stance on Vietnam. He was a supporter of the feminist activists who founded the Jane Collective to reduce the number of unsafe and expensive abortions being performed by unqualified providers by providing safe abortions and reproductive healthcare solutions to thousands of women, and by bringing attention to the many unsafe illegal abortions done in Chicago.

The cold winters of Chicago finally convinced Arthur to head for the west coast, and he packed all his belongings in an old, cheap van and headed to California dreaming of sunshine and vowing to eat an orange a day – a practice that he followed faithfully. While he pursued graduate studies in computer science and economics at the University of California, San Diego, he was drawn to innovation and invention.

Arthur was propelled by an unquenchable curiosity, and in California his work as an analyst, designer and programmer took him on many technical deep dives. He worked on international cash-transfer systems, cyber-security and client/server encryption systems for the USPS, and national air traffic control system for NASA. He designed a natural language translation system, a real-time financial data feed for the stock market, and a myoelectric control driver for a virtual reality system. He holds four patents.

Constantly drawn to the challenge of new platforms, in the 80’s he found himself at Sierra On-Line where he developed a ground-breaking 3-D adventure game for the IBM PC Junior first released as Kings Quest. Then he met the Amiga Computer, still in prototype at the time, and recognizing its unique capabilities, he designed and, with a group of friends, produced a real-time framegrabber. “LIVE!” became a creative tool for Andy Warhol and countless other artists, videographers, scientists and enthusiasts, much to Arthur’s delight.

A fine writer, Arthur’s natural genre was purely his own – comic, technical storytelling that made readers smile and understand. His seminal works include Confessions of an Amiga Hacker – by Mike Hacker as told to Arthur Abraham, Build a Hacker Kit, Cryptographic Issues in The Rocky Horror Picture Show, and The International Chemical Mind Control Baby Conspiracy. As a sculptor and artist, Arthur produced works with his own unique signature and developed techniques to cast in plastic and bronze. Before he died, Arthur was planning to explore the lost-wax process of bronze casting; his family has commissioned the ArtWorks Foundry in Berkeley to reproduce three of Arthur’s sculptures in bronze.

Arthur loved and was loved by his life partner Wendy, his children Else and Omri, his sister Irene and his brother Irwin and their spouses Gabriel and Lisa, his mother Ruth and father Isadore, his nieces and nephews Noah, Greta, Michael and Becky, his cousin Rob, his friends Russel, Joe and Dan, and so many other family, friends and colleagues whose paths he crossed in his 74 years on this planet.

We will remember Arthur smiling irrepressibly; saying “hold still, just a little bit longer” as he takes a cast of a friend’s face; fluffing his kinky hair out until it frames his head like a giant red halo; making glow-in-the-dark sauerkraut; training Festinger the cat to perform a complicated series of moves across the room to end up perched on Arthur’s shoulder; baffling business colleagues by taking notes in shorthand; driving fast through the Oakland hills with the windows of the old Camry rolled down; climbing through the Tactile Dome at the Exploratorium; making balloon animals for strangers on the “L”; flying N6079K over the San Francisco Bay; working the equations of quantum mechanics in order to really understand it; listening to Joe Frank on the radio; eating blue cheese with solemn intensity; reading science fiction (Asimov, Philip K. Dick, Heinlein, and a compendium of others); making origami-folded birthday cards for the people he loved; stepping out into the world wearing his broad-brimmed straw hat.