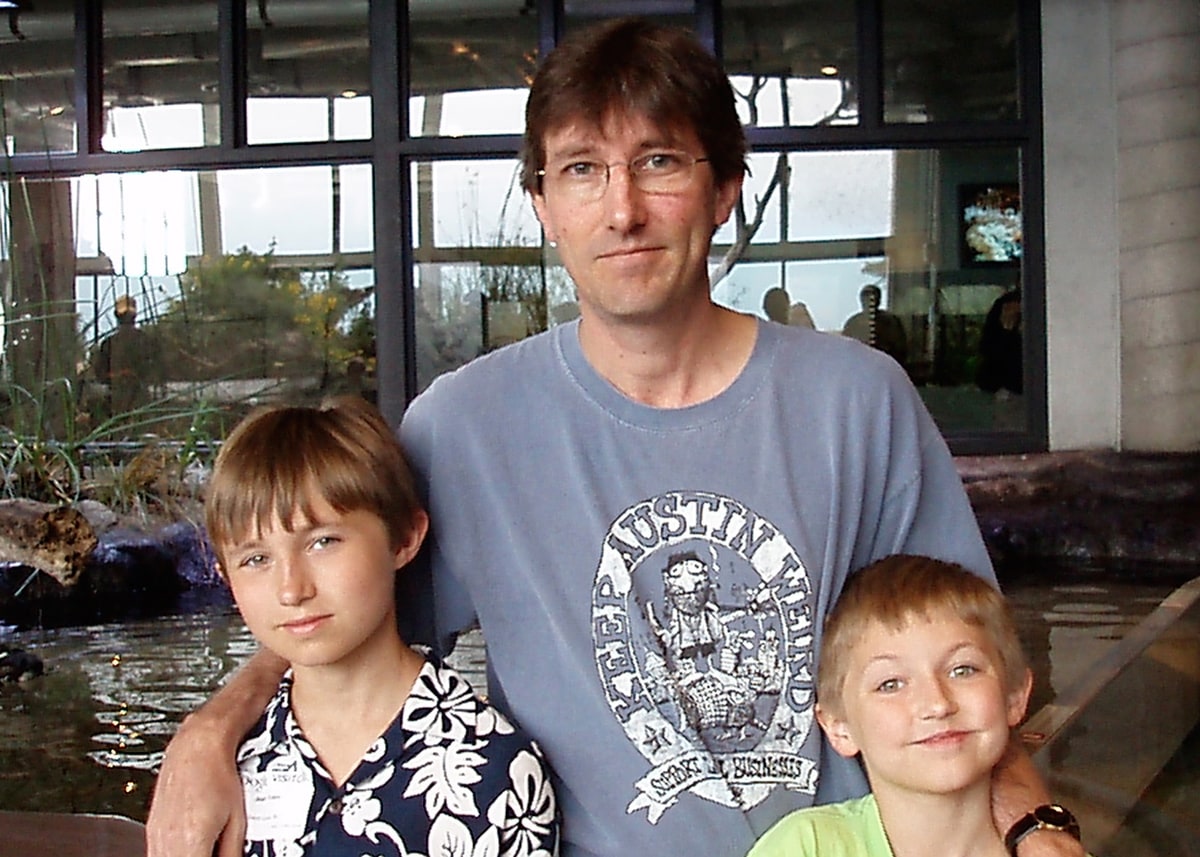 Alan Trent Foley was known to everyone as Trent. He said it was a curse being called by his middle name, and that we corrected the “mistake” by naming our first born Alan Trent Foley, Jr. and calling him “Alan.” Of course being called by your middle name is almost an American tradition in many families, and I, your humble narrator-Angel, had that in common with Trent.

He was born in Beech Grove, Indiana and reminisced about the large lots and bicycling around the neighborhood on sunny days. He is survived by his parents, Ralph Gilbert Foley and MaryAnn Foley, as well by his wife Deanna Buck Foley, his sister Cari Jo Foley, and his sons, Alan Trent Foley, Jr. and Alexander Michael Foley.

Trent moved with his parents to Houston, Texas and lived there until the middle of his junior year in high school. In Houston, at CyFair High School he met his friend Bill Jeffries. His parents moved that year, over Christmas break in 1981 to Austin, Texas. At Westlake High School he met his friend Ben Macklin. Trent's senior year of high school, he had a car accident in his Triumph TR7, and “bought” a telephone pole. He hit the guide wire coming down from the telephone pole. The collision cut off the top of the car, and Trent had to have brain surgery to let off pressure from the swelling and almost didn't graduate from high school that year. Nevertheless he recovered and Trent graduated from Westlake High School in 1983. Trent was a nerdy guy, as everyone knows, and he often ditched classes to go to the computer lab and learn how to program computers. Back then the computer terminals had to dial up to The University of Texas to work. He took all the advanced math and science classes and won a computer club award before he graduated.

Right out of high school he was hired by Hewlett Packard as a programer, and the Austin American Statesman, the local paper, did a one-page spread on how Trent was a computer prodigy and has wired his house electronics to respond to his command. Funny, it has taken till just recent years for Industry to catch up to what he was doing back then. He started going to college at the University of Texas, but the allure of working and earning a living drew him away from school. He met his friend Gib Hilton in college, as well as Lyle and Vickie Hutchins. He had worked at a couple of programming companies, and he told me that he had even written accounting software in Spanish. When I met him in 1991 he was working at the Texas State Board of Insurance with a networking team of people who helped the hundreds of employees on the fly as well as wrote custom software for them.

Eric Robertson, who worked with Trent at the State Board of Insurance introduced us on “dart night.” The gang would practice every other Thursday and play another team on the other Thursdays. Back then Trent rode a bicycle everywhere, and sometimes depended on the kindness of co-workers like Eric to give him rides to and from things like dart night.

In 1991 Trent and I had a whirlwind romance, eloped and moved to St. Louis, Missouri where I had been accepted to law school. I loved his quirky sense of humor and how he could almost always analyze a problem and sort it out calmly. He continued to play darts at Blueberry Hill, and then later at Sarto's bar, which was close to our rental house. From about 2000 to the fall of 2011 he played darts in a league at The Trophy Room, and had many hours of fun with his friends Kenny Robinson, Rose Linck and Kenny's brother, Robbie Robinson, and many others. Robbie's cabin was always a great weekend away for “the guys.” We enjoyed summer fishing trips with Jim and Kim Jones out at Big River and Bass River Resort.

In 1995 our first son, Alan Trent Foley, Jr. was born, and then later, in 1997, our second son, Alexander Michael Foley was born. Trent always said that raising our boys was the best thing he had ever done. The boys went to St. Ambrose Catholic School, and then graduated from St. John Vianney High School. During their childhood, Trent enjoyed taking family vacations with them across the country to various destinations. We enjoyed the National parks one year and the coast of California on another trip. Trent thought we did a really good job raising the boys, and often patted ourselves on the back. Alan, now 21 years old, and Alex, 18 years old, are both turning out to be happy, healthy, independent young men. We are both so proud of them.

Trent took an avid interest in the world around him. Every morning he watched news from Japan, Germany and then England. He always said he was fiscally conservative and socially liberal. He felt strongly about equal rights for all races, religions and sexes. He celebrated with me when marriage equality between same-sex people became the law of the land. During his last month of life he told everyone who would listen to “Vote for Hillary because we need more liberal justices on the Supreme Court to help ensure womens' reproductive rights and keep Roe v. Wade from being overturned.” Regarding guns, we didn't have any in our house because we felt they were a danger with children in the house. But Trent also joked that if everyone were required to carry a gun, everyone would be more polite. Loved that one!

I can't complete this without mentioning how Trent loved his cats. He loved Peanuts growing up, and then Ivan the Terrible, Zeus, and Achmed when we first got married. Here at the end he doted on Zack and Shadow and spoiled the hell out of them. Oh, how those cats will miss him! Trent also took to make gourmet chocolates for family and friends these last few years. I think he almost had as many pictures of the chocolates as he did of the cats.

In October of 2011, Trent was diagnosed with Stage 4 colon cancer. Trent loved to tell the story of how he found out: The Cardinals had just won the play-offs that year, and his friends, Ken Vanderzell, and Adam Roach were on the front porch enjoying bourbon and cokes into the late evening. Trent was quite inebriated and fell off the top of the porch, down 5 steps and to the first landing. In the process he broke a finger, fractured his back, sliced open his chin and skinned his nose. Barnes Jewish Hospital admitted him to treat the fractured back. In the process, a CT scan revealed the tumor in his colon, and 5 days later when he was released, Trent was scheduled for his first appointment with an oncologist. He had surgery in the Spring of 2012, and they removed 1/3 of his colon and ¼ of his liver where it had spread, and for about 6 months we though he might be cancer free. But as most of you should know, once cancer has spread to other organs, it is in your lymph system and will keep spreading. Trent did traditional chemo, as well as participating in two major trials, one was chemo embolism, which required surgery, and the other was chemo pills out of Japan. Trent lasted 13 months on the chemo pills, called lon surf, which was longer than anyone else in the trial. The drug was for colon cancer patients in which all other options were exhausted. Trent occasionally took breaks from chemo in order to try to enjoy life just a little bit, but with Cancer, there is no real relief, certainly not long-lasting relief. He died on Thursday, July 28, 2016, and will be sorely missed by all that knew him, especially me, his loving wife, Angel Foley.